If you haven’t already discovered them, the clematis varieties based on the European species Clematis viticella will alter your perception of clematis being somewhat difficult to grow plants. The actual species is found in nature over a large range from South-eastern France through the whole of Italy, Greece and the Balkans across Turkey and into Iran and Iraq. This geographic region can experience extremes of heat and cold and also suffers from seasonal droughts and floods. Clematis viticella has become adapted to survive and flourish with these conditions. Couple this with its natural immunity to the fungus that causes “Clematis wilt” and its long branched leaf structure which enables it to hang on even in windy conditions and you sometimes wonder why they appear to be such a well-kept secret! 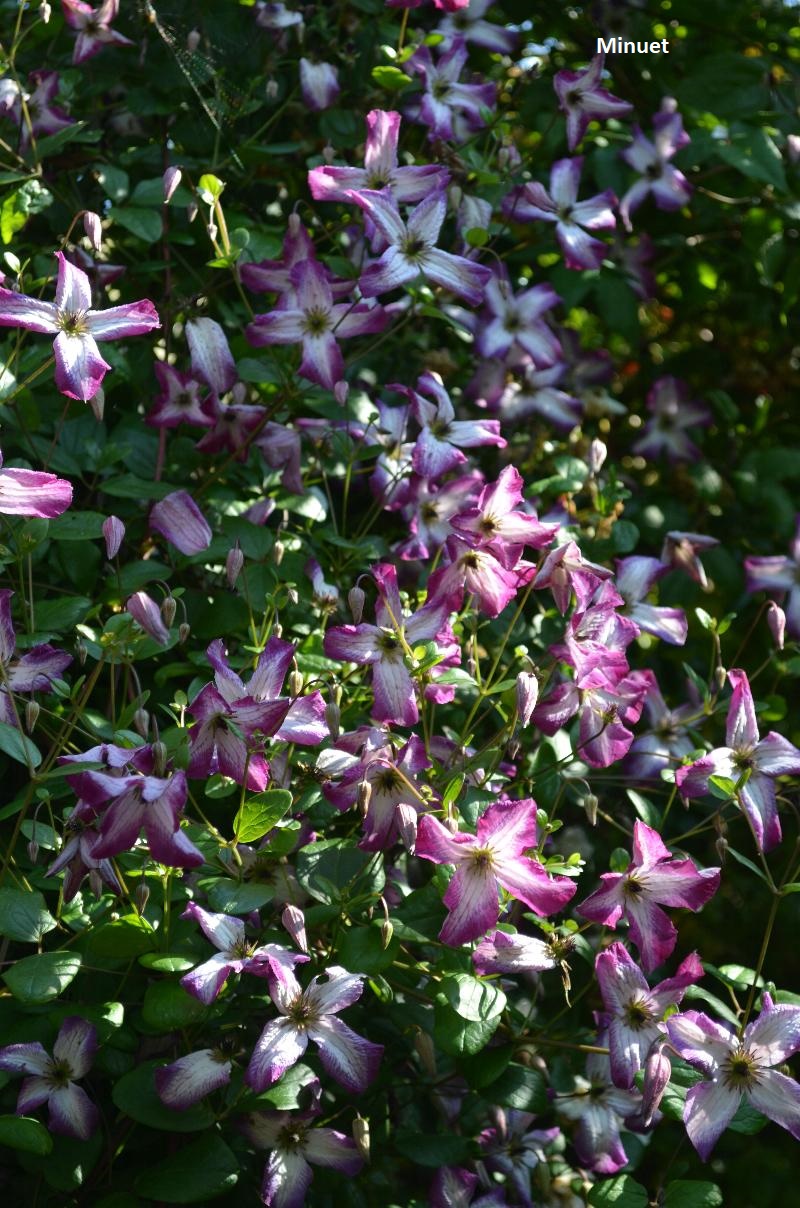 Although gardeners have grown many different colour breaks (and even double forms) for thousands of years (the Romans were fond of them for trellises) they fell out of favour in Europe once the first of the large flowered species arrived here in the mid 1800’s from the Far East. Gardeners fell for the huge flowers of these elegant Chinese and Japanese plants such as Clematis patens and a whole industry grew up around producing them. Unfortunately, these new species encountered “Clematis wilt” here in Europe, a fungus unknown in Japan and China and to which they had no natural immunity. Also, these plants need to keep all their previous years growth intact and in good condition to produce these magnificent flowers, unlike C. viticella which flowers only on its new growth each year. To get the best from large flowered clematis you need to give it a good spot, and to have some idea as to the correct pruning, unlike their European cousins Clematis viticella, which can be simply hacked down to the ground each winter. 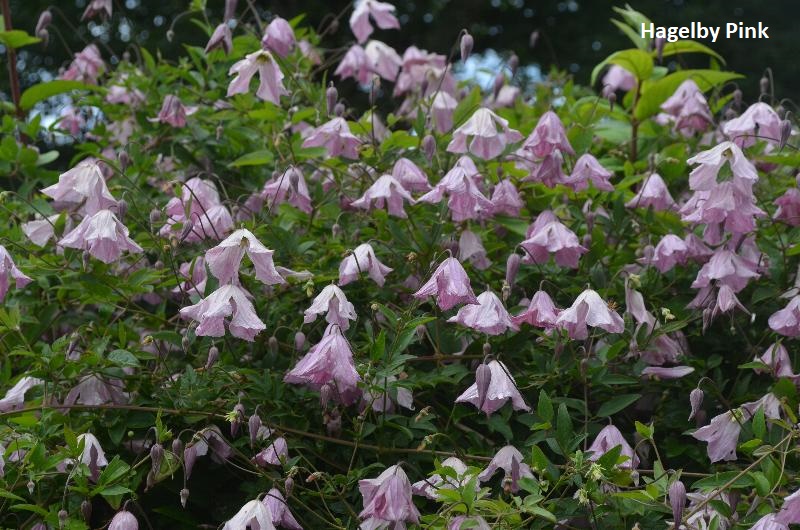 It wasn’t until the 1830’s that the first clematis hybrid was created when Clematis viticella was crossed with another European clematis, the herbaceous non-climbing Clematis integrifolia; the resulting plant Clematis x eriostemon is still available and has nodding blue scented flowers. Shortly after this the large flowered species started to arrive in Europe, these were crossed one with another and many fine large flowered clematis were produced. Interest in C. viticella faded until in the 1860’s George Jackman famously crossed C. viticella with one of the large flowered species to create Clematis ‘Jackmanii’, instantly popular for its large purple flowers and the ability to be cut hard back. Still popular today even though it has inherited some susceptibility to “Clematis wilt”. Some nurserymen, however, continued with the viticella types, improving and refining them, but the gardeners of the day didn’t want them and they remained on the fringes. A classic example is Clematis 'Kermesina' dating to 1883. Still available, this is a cracking red flowered clematis. 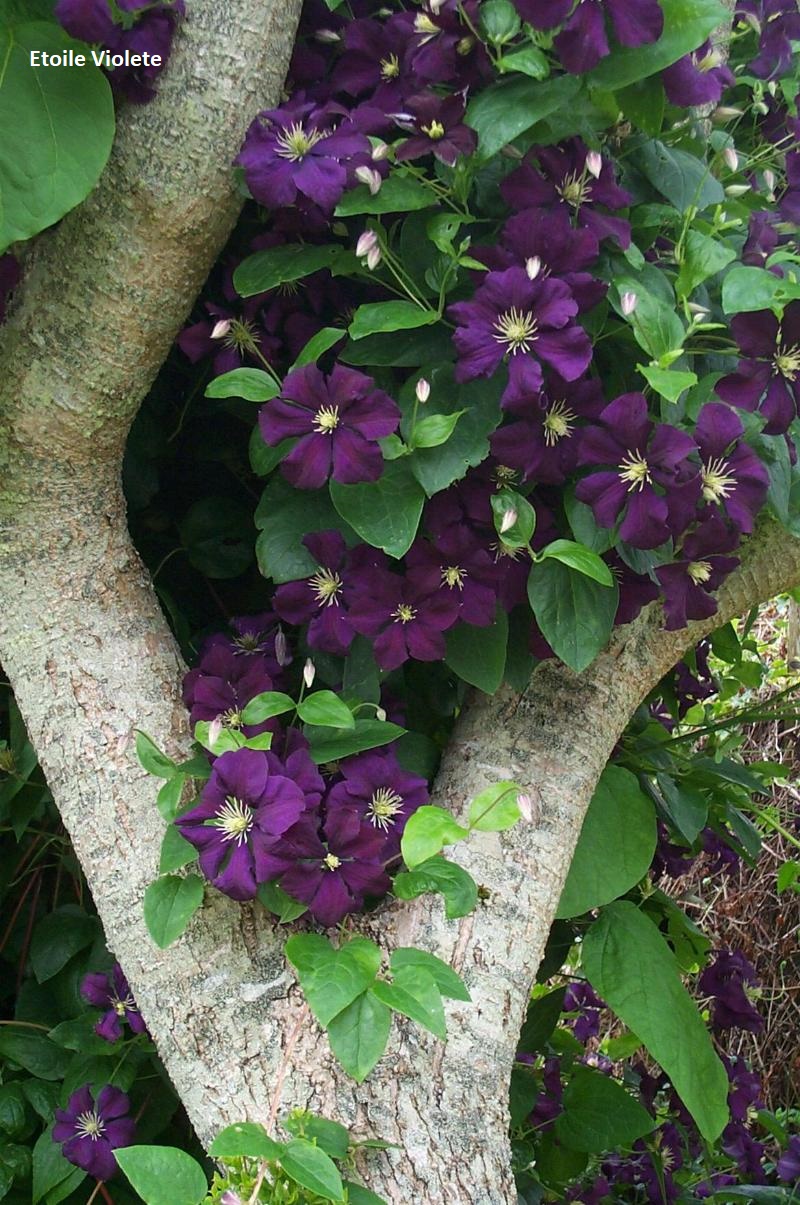 By the late 1880’s most of the remaining clematis nurseries had gone bust or changed to growing other plants. One nurseryman, Morel, had tried to save his business by going back to Clematis viticella and starting hybridising again to try and produce disease-free cultivars. He was successful, but it didn’t save his business despite producing such plants as ‘Etoile Violette’, still rated the number one clematis in a poll of nurseries and clematis society members. ‘Madam Julia Correvon’ and the double 'Purpurea Plena Elegans' were also from him and all are still available. 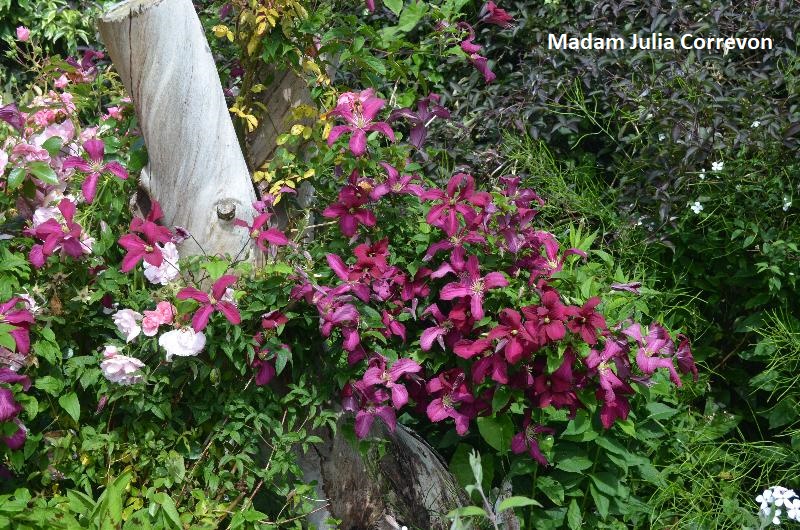 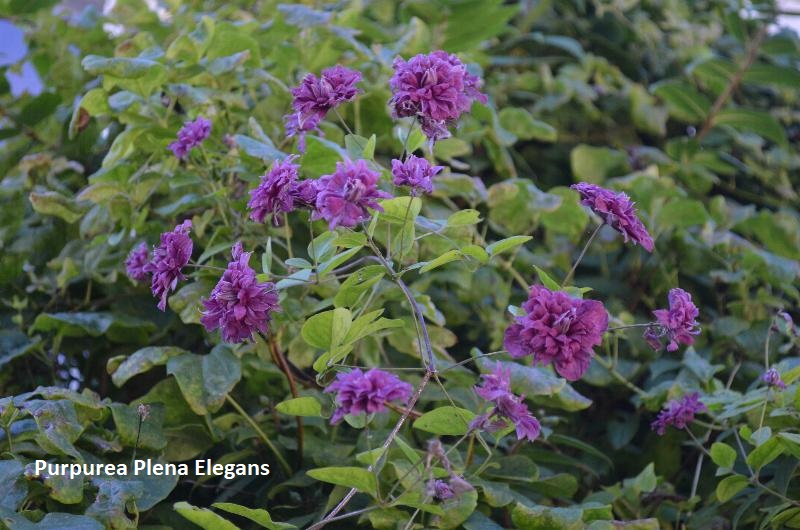 Fortunately, he passed much of his breeding programme over to William Robinson at Gravetye Manor who along with his head gardener Ernest Markham continued to introduce some very good cultivars like 'Little Nell' and ‘Minuet’ from 1915 right up to ‘Abundance’ in 1939, from those seedlings. 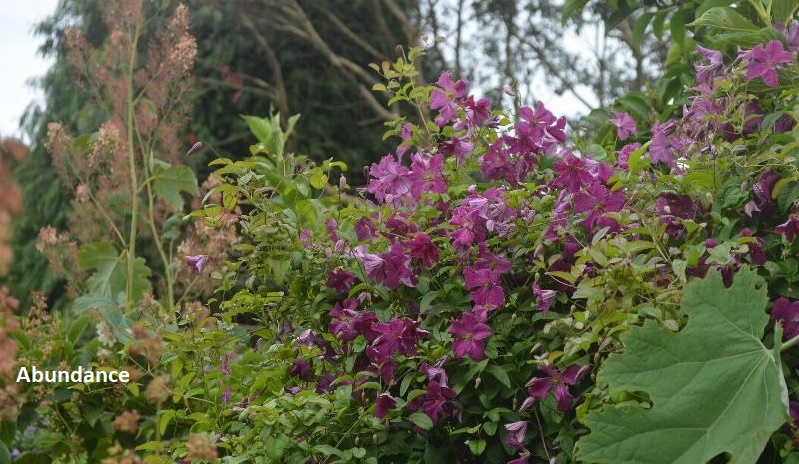 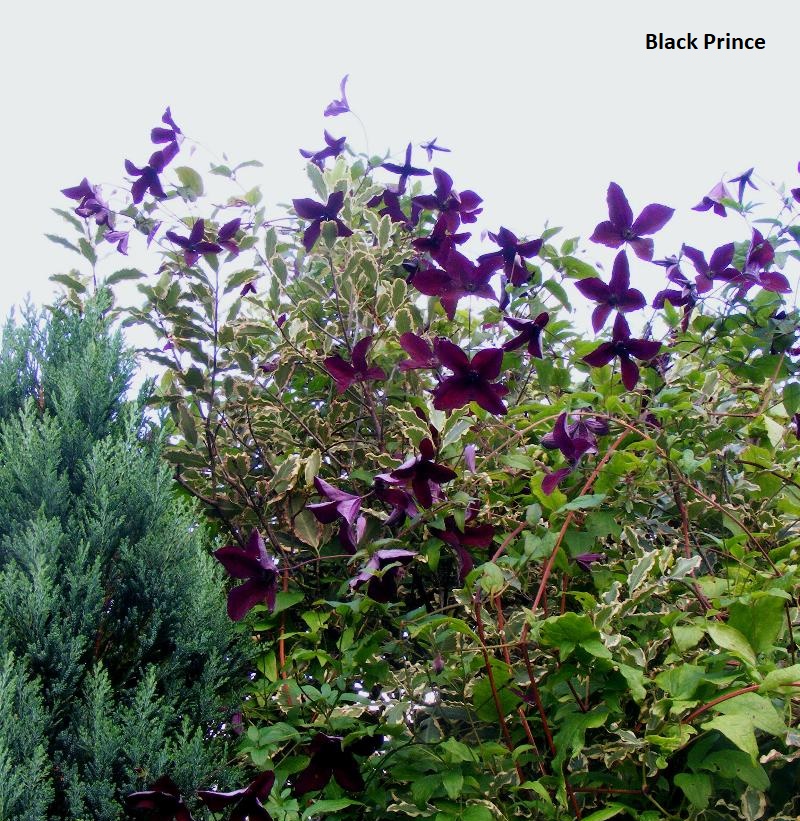 These days their merits have been recognized, and their ability to provide a lot of flower from July to September while growing over or through shrubs and other plants mean gardeners can have both early or late shrubs such as Forsythia, Camellia or Senna and still have a good show of flower in summer. Many fine plants have been introduced in the last 20 years ‘Black Prince’, ‘Emilia Plater’, ' Hagelby Pink’ and ‘Poldice’ are just a few reliable favourites. 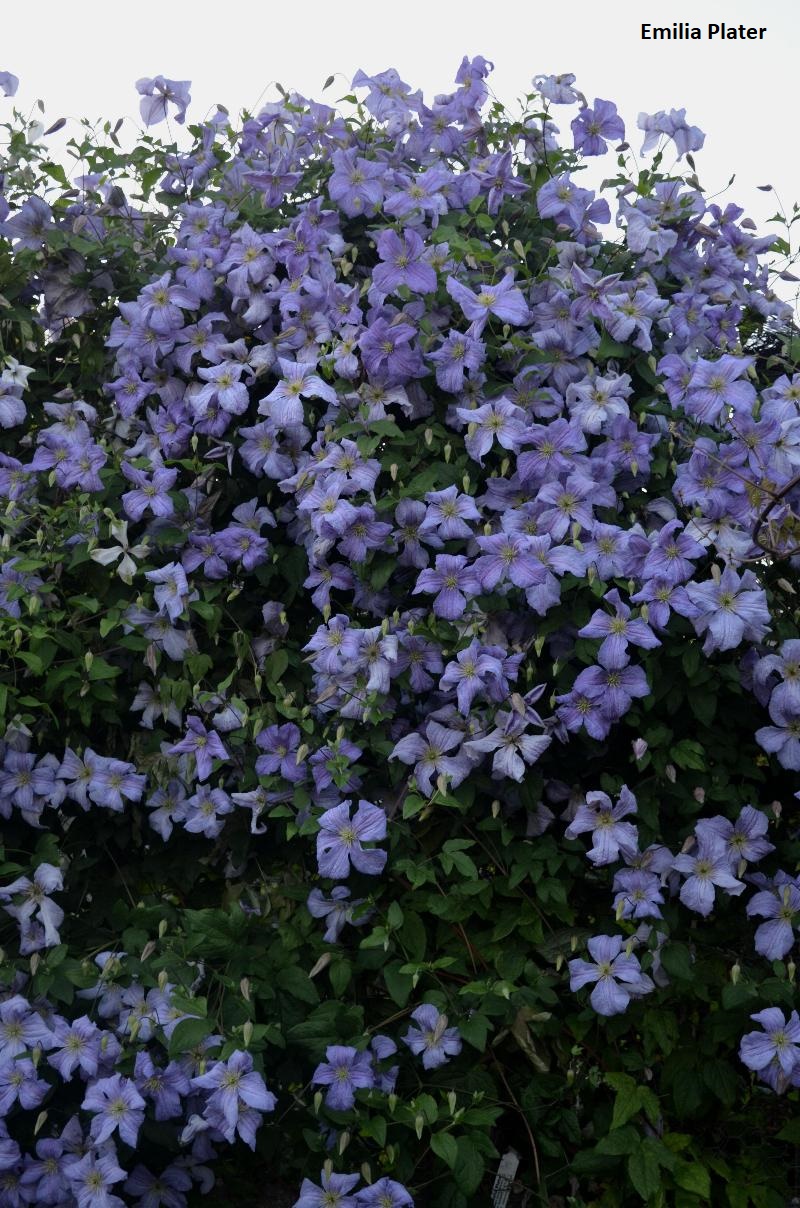 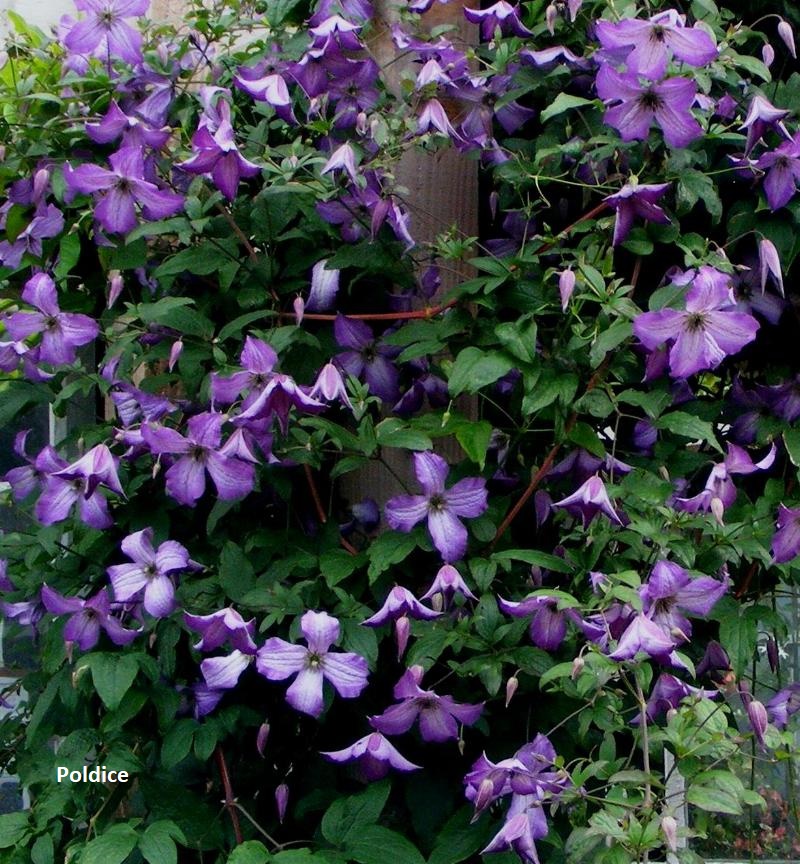 These days clematis are usually supplied container grown on their own roots which means they can be planted at any time of year and there is no danger of the rootstock overtaking the variety. For planting, here at Roseland House we would recommend, on normal or dry soils to plant deeply, burying a few inches of stem. There are two reasons for doing this, the first is that there will be a better moisture supply down deep during the summer, the second is that the buried buds will become shoots from below ground once the stems are cut back, this way the plants will establish a many stemmed crown more quickly. If your soil is wet or inclined to waterlogging, you can achieve much the same result with shallow planting followed by mounding up around the stems to create a volcano shape. Using a watering tube at planting time (plastic bottle with top and bottom cut off) will enable water to be supplied to the roots in dry weather the first summer after planting, thereafter it can be removed. 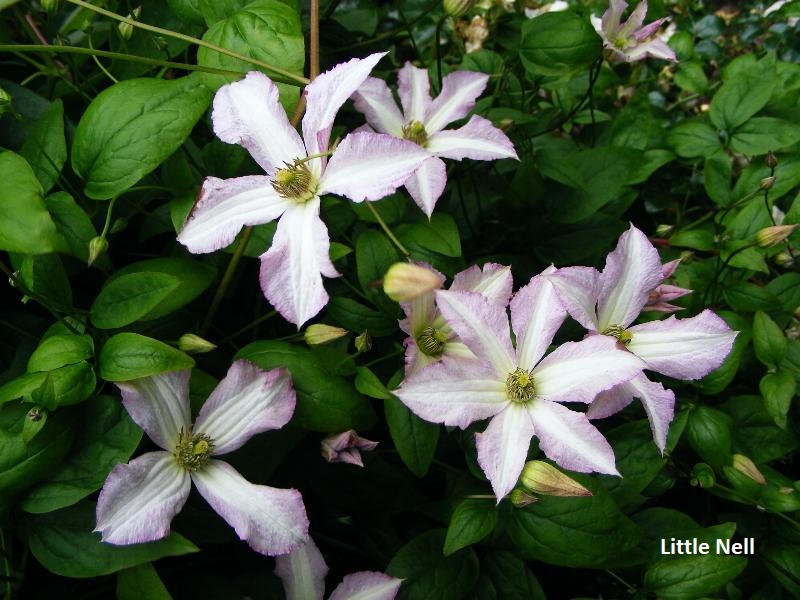 Pruning wise, these plants can be cut to the ground during winter as only the new growth each year will flower, in reality this gives you a time-frame of November to April, pruning after April is still possible but will make the flowering a bit later (can be useful sometimes to delay a plants flowering). Do you have to prune them? No, you don’t - no one rushes around the Italian countryside chopping the wild plants back and they flower just fine, so why bother? Well, they look a mess in winter and if you don’t need that mess the following year it makes sense to get rid of it, plus individual clematis stems do not live forever, and it pays to make the plant send up new stems on a regular basis so it is constantly renewing itself. Of course, hard pruning does mean the plant will need some help with food, they need nothing special, we use blood fish and bone (but if you are a dog owner you may have to go for something inorganic!) But whatever you use don’t let it touch the stems, and don’t feed the plants while they are actually flowering as it seems to make the flowering period shorter. 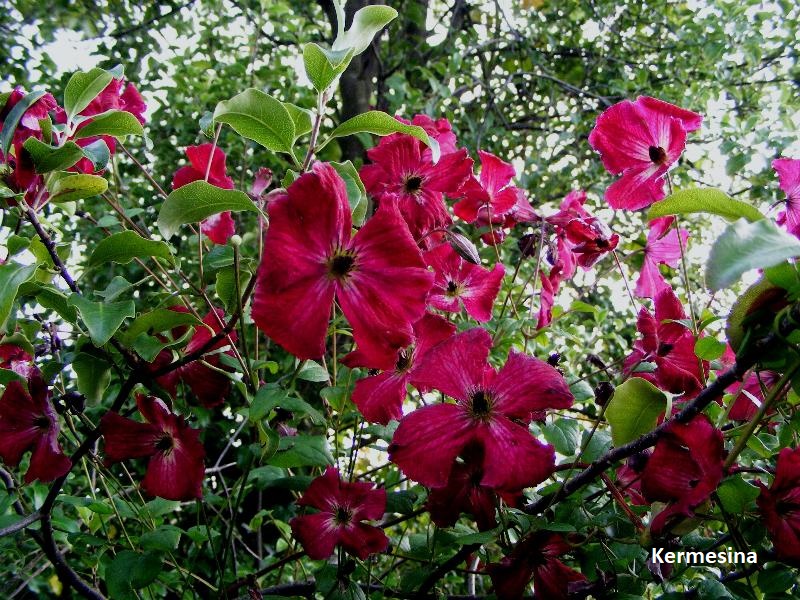 Other than the deep shade under large trees there are varieties that will grow just about anywhere else. One of the huge advantages of buying plants at specialist plant fairs is the ability to ask the person who grew the plant for the best options.

Charlie and Liz Pridham hold the National Plant Collections of Clematis viticella and Lapageria rosea Cultivars at their garden in Chacewater in Cornwall. They also grow many other interesting and unusual climbers. They are always happy to bring orders to a Plant Hunters' Fair they are attending.

To place an order: